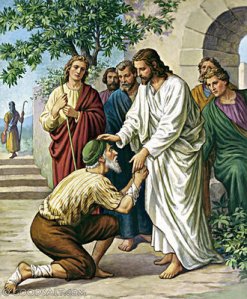 “It happened that there was a man full of leprosy in one of the towns where Jesus was; and when he saw Jesus, he fell prostrate, pleaded with him, and said, “Lord, if you wish, you can make me clean.”

Jesus stretched out his hand, touched him, and said, “I do will it. Be made clean.”

And the leprosy left him immediately.

Then he ordered him not to tell anyone, but “Go, show yourself to the priest and offer for your cleansing what Moses prescribed; that will be proof for them.”

The report about him spread all the more, and great crowds assembled to listen to him and to be cured of their ailments,
but he would withdraw to deserted places to pray.” -Luke 5:12-16. 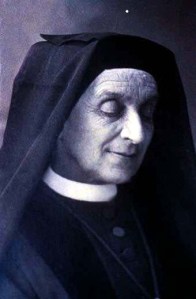 Léonie Aviat was born in Sézanne, in the region of Champagne (France) on September 16, 1844. She attended school at the Monastery of the Visitation in the city of Troyes, where Mother Marie de Sales Chappuis, the superior, and Father Louis Brisson, the chaplain, exerted a decisive influence on her.

Having thus been formed at the school of St. Francis de Sales, she prepared herself for the mission with which she was to be entrusted: the foundation of a Congregation committed to the Salesian spirituality and to the evangelization of young workers.

The beginnings came in the year 1866. This was the time when large industrial concerns were attracting an underpaid labor force to the cities.

This was also the case in the city of Troyes, where textile mills engaged young girls of rural extraction. Father Brisson, a zealous apostle and already one of the forerunners of the great social movement that developed at the end of the 19th century, had opened a center, in 1858, to welcome young girls working in the textile mills in order to give them a complete education, both human and Christian.

Unable to find a suitable directress and a stable supervisory staff for this center, known as the “Oeuvre Saint-François de Sales”, with God’s inspiration, he decided to establish a religious congregation.

He found in Léonie Aviat an incomparable co-worker, in whom he discerned a vocation to the consecrated life as well. Indeed, upon completing her studies, the young lady left the Visitation monastery with the firm intention of returning to it as a lay Sister.

But Father Brisson and Mother Chappuis advised her to wait. Obedient to what she regarded as God’s will, she received a special sign from Him a little later, one that couldn’t be mistaken for an illusion: obliged to go to the factory, where glasses were manufactured and repaired, in Sézanne, her native city, an inspiration enlightened her mind and guided her decision.

The sight of the workroom filled with young factory workers busily engaged in their work beneath the watchful and maternal gaze of a supervisor aroused in her heart the desire to take her place among them in order to counsel and guide them.

This attraction would press her even more strongly the day that Father Brisson invited her to visit the “Oeuvre ouvrière” which he had founded in Troyes.

On April 18, 1866, she joined the “Oeuvre Saint-François de Sales”, with one of her former classmates of the Visitation, Lucie Canuet.

On October 30, 1868, the young foundress was clothed with the religious habit and received the name of Sister Françoise de Sales.

This name was a sign indicating what would be her life’s work, as she herself expressed it in the form of a prayer in her personal notes: “St. Francis de Sales, you have chosen me to be at the head of this little group; give me your spirit, your heart… Grant me a share of your union with God and of that interior spirit which knows how to do everything in union with Him and nothing without Him” (August, 1871).

The “little group” which she guided placed itself under the protection of the saintly Bishop of Geneva and completely adopted his method of spirituality and of pedagogy; hence, the name that it chose for itself: the “Oblate Sisters of St. Francis de Sales”, which means offered to God and to the neighbor by means of their whole life.

On October 11, 1871, Sister Françoise de Sales professed her vows, and the following year, she was elected Superior General of the new Congregation which was thus canonically established and able to expand rapidly.

Under her guidance, the community grew in numbers, and the social apostolate developed. At the same time, grade schools were opened in parishes, and in Paris the first boarding school for young ladies was also opened, an establishment which Mother Aviat directed for eight years.

The apostolate of the Oblate Sisters thus extended to the different classes of society and to all forms of education, and, from the very first years of its foundation, to the missions ad gentes as well.

In 1893, after a period of effacement which brought to light her humility, Mother Françoise de Sales was again elected Superior General, an office she held until her death.

During this time, she endeavored to develop the apostolate of the Congregation in Europe, South Africa, and Ecuador, while lavishing her untiring solicitude on every community and on each of her Sisters.

In 1903, she had to cope with the persecution directed against religious orders in France. While maintaining the houses of her Congregation that could be maintained in France, she transferred the Mother House to Perugia, Italy.

In 1911, she secured the final approbation of the Constitutions of the Institute from Pope St. Pius X.

On January 10, 1914, she died in Perugia with serenity, totally entrusting herself to God. To the very end, she remained faithful to the resolution made at the time of her Profession: “To forget myself entirely”.

To her daughters in every age, she left this very Salesian precept: “Let us work for the happiness of others”.