“After the five thousand had eaten and were satisfied, Jesus made his disciples get into the boat and precede him to the other side toward Bethsaida, while he dismissed the crowd.

And when he had taken leave of them, he went off to the mountain to pray.

When it was evening, the boat was far out on the sea and he was alone on shore.

Then he saw that they were tossed about while rowing, for the wind was against them.

About the fourth watch of the night, he came toward them walking on the sea.

He meant to pass by them.

But when they saw him walking on the sea, they thought it was a ghost and cried out.

They had all seen him and were terrified.

But at once he spoke with them, “Take courage, it is I, do not be afraid!”

He got into the boat with them and the wind died down.

They were (completely) astounded.

They had not understood the incident of the loaves. 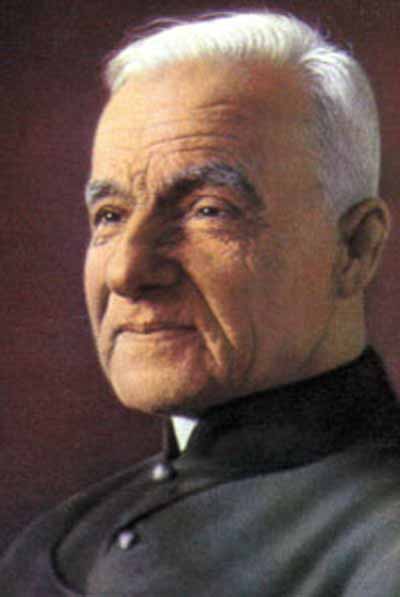 Brother André was born Alfred Bessette on August 9, 1845, in Quebec, Canada. By the age of twelve, André and his siblings were left orphans-their mother died of tuberculosis, and their father had died three years earlier in a lumbering accident.

Though he was barely able to read or write, André was forced to leave school and learn a trade.

For thirteen years he labored in various industries despite his own frail health.

In 1870, he entered the Congregation of Holy Cross and was assigned as the doorkeeper of the community’s high school in Montreal.

There he welcomed the sick and suffering of the city and encouraged them to pray to Saint Joseph, to whom the Holy Cross Brothers were dedicated by their founder, The Venerable Basil Moreau, C.S.C. Brother André’s visitors often found that they had been healed of their illnesses and received other spiritual favors.

Brother André became known as the “Miracle Man” of Montreal, but he always gave the credit to Saint Joseph.

So many people came to call on Brother André that he built a small chapel to Saint Joseph across the street from the school.

Through André’s determination and prayer, and the generosity of his many friends, the great Oratory of Saint Joseph began to rise on Mount Royal.

Today millions of visitors still come to the Oratory to pray to Saint Joseph and to Blessed Brother André, and to seek physical and spiritual healing.

This simple man of prayer was so beloved, that more than a million people attended his funeral in a blinding snowstorm.

His body lies in the beautiful basilica he built in honor of St. Joseph.

In his homily that day, The Holy Father said this of Brother André:

“A daily crowd of the sick, the afflicted, the poor of all kinds-those who were handicapped or wounded by life-came to him. They found in his presence a welcome ear, comfort and faith in God. Do not the poor of today have as much need of such love, of such hope, of such education in prayer?”