The Forty Martyrs of Sebaste

The Forty Martyrs were soldiers quartered at Sebaste in Armenia, about the year 320.

When their legion was ordered to offer sacrifice to idols, they refused to betray the faith of their baptism, and replied to all persuasive efforts, We are Christians!

When neither cajolings or threats could change them, after several days of imprisonment they were chained together and taken to the site of execution.

It was a cruel winter, and they were condemned to lie without clothing on the icy surface of a pond in the open air until they froze to death.

The forty, not merely undismayed but filled with joy at the prospect of suffering for Jesus Christ, said: No doubt it is difficult to support so acute a cold, but it will be agreeable to go to paradise by this route; the torment is of short duration, and the glory will be eternal. This cruel night will win for us an eternity of delights. Lord, forty of us are entering combat; grant that we may be forty to receive the crown!

There were warm baths close by, ready for any among them who would deny Christ.

One of the confessors lost heart, renounced his faith, and went to cast himself into the basin of warm water prepared for that intention.

But the sudden change in temperature suffocated him and he expired, losing at once both temporal and eternal life.

The still living martyrs were fortified in their resolution, beholding this scene.

Then the ice was suddenly flooded with a bright light; one of the soldiers guarding the men, nearly blinded by the light, raised his eyes and saw Angels descend with forty crowns which they held in the air over the martyrs’ heads; but the fortieth one remained without a destination.

The sentry was inspired to confess Christ, saying: That crown will be for me! Abandoning his coat and clothing, he went to replace the unfortunate apostate on the ice, crying out: I am a Christian!

And the number of forty was again complete.

They remained steadfast while their limbs grew stiff and frozen, and died one by one.

Among the forty there was a young soldier named Meliton who held out longest against the cold, and when the officers came to cart away the dead bodies they found him still breathing.

They were moved with pity, and wanted to leave him alive, hoping he would still change his mind.

But his mother stood by, and this valiant woman could not bear to see her son separated from the band of martyrs.

She exhorted him to persevere, and lifted his frozen body into the cart.

He was just able to make a sign of recognition, and was borne away, to be thrown into the flames with the dead bodies of his brethren.

Their bones were cast into the river, but they floated and were gathered up by the faithful. 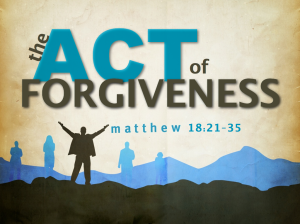 “Peter approached Jesus and asked him, «Lord, if my brother sins against me, how often must I forgive him? As many as seven times?»

Jesus answered, “I say to you, not seven times but seventy-seven times.

That is why the kingdom of heaven may be likened to a king who decided to settle accounts with his servants.

When he began the accounting, a debtor was brought before him who owed him a huge amount.

Since he had no way of paying it back, his master ordered him to be sold, along with his wife, his children, and all his property, in payment of the debt.

At that, the servant fell down, did him homage, and said, ‘Be patient with me, and I will pay you back in full.’

Moved with compassion the master of that servant let him go and forgave him the loan.

When that servant had left, he found one of his fellow servants who owed him a much smaller amount.

He seized him and started to choke him, demanding, ‘Pay back what you owe.’

Falling to his knees, his fellow servant begged him, ‘Be patient with me, and I will pay you back.’

But he refused. Instead, he had him put in prison until he paid back the debt.

Now when his fellow servants saw what had happened, they were deeply disturbed, and went to their master and reported the whole affair.

His master summoned him and said to him, ‘You wicked servant! I forgave you your entire debt because you begged me to.

Then in anger his master handed him over to the torturers until he should pay back the whole debt.

So will my heavenly Father do to you, unless each of you forgives his brother from his heart.”” -Matthew 18:21-35.