Marguerite Bourgeoys was born in Troyes, in the province of Champagne (France), on Good Friday, April 17, 1620.

She was baptized on the same day in the church of Saint-Jean, a church that was located near her home. Marguerite was the sixth child in a family of twelve.

Her parents were Abraham Bourgeoys and Guillemette Gamier, and she was privileged to grow up in a milieu that was middle class and thoroughly Christian.

Marguerite was nineteen years of age when she lost her mother. In the following year, 1640, in the course of a procession held on October 7 in honor of Our Lady of the Rosary, she had an unforgettable experience.

Her eyes rested on a statue of the Blessed Virgin, and at that moment she felt inspired to withdraw from the world and to consecrate herself to the service of God.

With that unchanging fidelity to what she believed to be God’s will for her, a fidelity that characterized her life thenceforth, she set about to discern her specific vocation.

She registered, at once, as a member of the extern Congregation of Troyes, an association of young girls devoted to the charitable work of teaching children in the poor districts of the
town. While engaged in this apostolate she learned about the foundation of Ville Marie (Montreal) in Canada. The year was 1642, and at that time she sensed a first call to missionary life.

This call was rendered concrete in 1652 when she met Monsieur de Maisonneuve, founder and governor of the settlement begun in New France, who was in search of someone who would volunteer her services for the gratuitous instruction of the French and Indian children.

Our Lady confirmed the call addressed to her: “Go, I will not forsake you”, she said.

Thus assured, Marguerite left Troyes in February, 1653, in a spirit of complete detachment.

She arrived in Montreal on the following 16th of November, and without delay she set to work to promote the best interests of the colony.

She is rightly considered co-foundress of Montreal, with the nurse, Jeanne Mance, and the master designer, Monsieur de Maisonneuve.

In order to encourage the colonists in their faith expression, she arranged for the restoration of the Cross on Mount Royal after it has been destroyed by hostile Indians, and she undertook the construction of a chapel dedicated to Notre-Dame de Bon Secours. Convinced of the importance of the family in the building of this new country, and perceiving the significance of the role to be exercised by women, she devoted herself to the task of preparing those whose vocation it would be to preside in a home.

In 1658, in a stable which had been given to her by the governor for her use, she opened the first school in Montreal.

She also organized an extern Congregation, patterned after the one which she had known in Troyes but adapted to the actual needs. In this way, she could respond to the needs of the women and young girls on whom much depended as far as the instruction of children was concerned.

In 1659, she began receiving girls who were recommended by “les cures” in France, or endowed by the King, to come to establish homes in Montreal, and she became a real mother to them.

Thus were initiated a school system and a network of social services which gradually extended through the whole country, and which led people to refer to Marguerite as “Mother of the Colony”.

On three occasions, Marguerite Bourgeoys made a trip to France to obtain help. As of
1658, the group of teachers who associated themselves with her in her life of prayer, of heroic poverty, and of untiring devotedness to the service of others, presented the image of a religious institute.

The group was inspired by the “vie voyagere” of Our Lady, and desired to remain uncloistered, the concept of an uncloistered community being an innovation at that time.

Such a foundation occasioned much suffering and the one who took the initiative was not spared. But the work progressed.

The Congregation de Notre-Dame received its civil charter from Louis XIV in 1671, and canonical approbation by decree of the Bishop of Quebec in 1676. The Constitutions of the Community were approved in 1698.

The foundation having been assured, Sister Bourgeoys could leave the work to others. She died in Montreal on January 12, 1700, acknowledged for her holiness of life.

Her last generous act was to offer herself as a sacrifice of prayer for the return to health of a young Sister.

Forty memberg of the Congregation de Notre-Dame were there to continue her work.

The educative and apostolic efforts of Marguerite Bourgeoys continue through the commitment of the members of the community that she founded.

More than 2,600 Sisters of the Congregation de Notre-Dame work in fields of action according to the needs of time and place – from school to college or university, in the promotion of family, parish and diocesan endeavours.

They are on mission in Canada, in the United States, in Japan, in Latin America, in Cameroon, and most recently they have established a house in France.

Commentary on The Reading of the day provided by :

Pope, Doctor of the Church
Homilies on the Gospel, no.5

“Then they abandoned their nets and followed him”

Perhaps someone will say…: “What, and how much did they give up… these two fisherman who had almost nothing?”… Someone who has abandoned everything, no matter how little it is, has left much behind.

Surely we hold on to what we have with love, and what we do not have we long for and seek to possess?

Peter and Andrew gave up much when along with their possessions they renounced even their craving to possess. As much is given up by those following them, then, as those not following them can crave…

No one should say to himself, even when he regards others who have left a great deal behind: “I want to imitate those who despise this world, but I have nothing to leave behind.”

You leave a great deal behind, my friends, if you renounce your desires.

Our external possessions, no matter how small, are enough for the Lord: he weighs the heart and not the substance, and does not measure the amount we sacrifice to him but the effort with which we bring it.

If we think only about the outward substance, we see that our holy traders purchased the everlasting life of angels when they gave up their nets and boat!

The kingdom of God has no assessment value put on it, but it is worth everything you have. 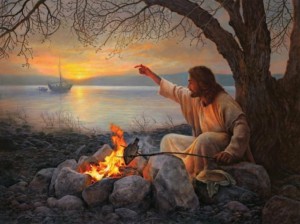 “After John had been arrested, Jesus came to Galilee proclaiming the Gospel of God:

This is the time of fulfillment.

The kingdom of God is at hand.

Repent, and believe in the gospel.

As he passed by the Sea of Galilee, he saw Simon and his brother Andrew casting their nets into the sea; they were fishermen.

Jesus said to them, “Come after me, and I will make you fishers of men.”

Then they abandoned their nets and followed him.

He walked along a little farther and saw James, the son of Zebedee, and his brother John.

They too were in a boat mending their nets.

Then he called them.

So they left their father Zebedee in the boat along with the hired men and followed him.” -Mark 1:14-20.