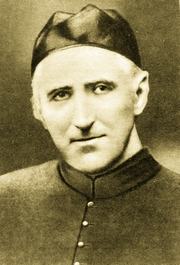 Saint Michael Garicoits was born in 1797 on a small farm in the south of France, near the town of Ibarre, not far from Lourdes and from Betharram, an ancient pilgrimage site.

Later the mother house of the Congregation which he founded, the Priests of the Sacred Heart of Betharram, was established at that site.

He was ordained a priest at Bayonne in 1823, and spent two years as Assistant in the parish of Cambo, where he established the devotion and confraternity of the Sacred Heart.

He was summoned to the Major Seminary of Betharram to serve as a professor of philosophy and theology in 1825, and he became Superior there in 1831.

In 1832 he made a retreat based on the Spiritual Exercises of Saint Ignatius, which strengthened in him his desire to found a new Society of Priests, a desire confirmed by his superiors’ approbation.

He had been greatly impressed by the poverty he had seen practiced by a holy Foundress of a Congregation of Sisters, herself compared to Saint Teresa of Avila, who during her lifetime saw 99 houses of her Congregation established in several countries.

Saint Michael desired the same practice of poverty for his priests, as he had seen instituted under the direction of Saint Elizabeth Bichier des Ages, who founded the Daughters of the Cross, or Sisters of Saint Andrew.

Saint Elizabeth was, by a singular disposition of Providence, later canonized the same day as Saint Michael.

Both Saints taught the importance of the interior life as the unique and irreplaceable source of any serious apostolate.

In his early efforts as founder, the fervent priest was faced with the opposition of his bishop, who desired that the new Institute be placed more specifically under diocesan authority than under that of its religious Superiors.

Saint Michael, devoted to the Will of God, the point of departure to attain sanctity, remained in submission for long years.

In 1875, after a wholly supernatural intervention which occurred in the nearby Convent of Pau through the intermediary of the Arab Carmelite, Blessed Mary of Jesus Crucified, the Institute as he conceived it was approved in Rome under Leo XIII.

This occurred after the holy Founder had already been called to his reward in 1863.

Miracles by the dozens had followed his death, and the Priests of the Sacred Heart of Betharram spread in the lands of South America, as well as in France, England and Italy, where they direct teaching activities.

At the canonization, Pius XII exhorted the religious of the Institute of the Sacred Heart and the Daughters of the Cross, present at the canonization of their respective Founders, to maintain the primitive spirit of their Congregations, saying: Be deaf to the temptation to sacrifice your religious life and personal sanctification to the apostolate.

That would be similar to gathering beautiful flowers from a tree to form a bouquet, and afterwards wanting to find fruit on barren branches. 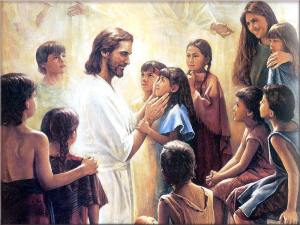 “As the Father loves me, so I also love you.

Remain in my love.

I have told you this so that my joy may be in you and your joy may be complete.

This is my commandment: love one another as I love you.

No one has greater love than this, to lay down one’s life for one’s friends.

You are my friends if you do what I command you.

I no longer call you slaves, because a slave does not know what his master is doing.

I have called you friends, because I have told you everything I have heard from my Father.

It was not you who chose me, but I who chose you and appointed you to go and bear fruit that will remain, so that whatever you ask the Father in my name he may give you.