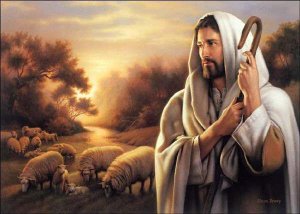 “I am the good shepherd.

A good shepherd lays down his life for the sheep.

A hired man, who is not a shepherd and whose sheep are not his own, sees a wolf coming and leaves the sheep and runs away, and the wolf catches and scatters them.

This is because he works for pay and has no concern for the sheep.

I am the good shepherd, and I know mine and mine know me, just as the Father knows me and I know the Father; and I will lay down my life for the sheep.

I have other sheep that do not belong to this fold.

These also I must lead, and they will hear my voice, and there will be one flock, one shepherd.

This is why the Father loves me, because I lay down my life in order to take it up again.

No one takes it from me, but I lay it down on my own.

I have power to lay it down, and power to take it up again.

Saint Imelda was born at Bologna in Italy, in the early 14th century. Still a child, she arranged a little oratory in her house, where she often would pray.

She resolved to enter a monastery and make the vows of religion, and to give herself entirely to her Saviour.

Her parents permitted her entry into a Dominican convent at Valdipietra, near Bologna.

She practiced mortifications above her age, and manifested a very tender love for the Queen of Angels and the Holy Eucharist, though she could not yet receive Holy Communion.

But God was soon to manifest that it is not age which wins His favor, but virtue.

On the day of the Ascension in 1333, when Imelda was twelve years old, she alone remained unable to advance to receive Holy Communion.

She raised her eyes to heaven and prayed to her Lord: Come, for I am languishing with love and dying with desire for Your adorable presence!

When He did not come, she continued to pray and weep. Suddenly, a miraculous Host came forth from the tabernacle, crossed the grill separating the choir, and stopped in the air before her.

The nuns, amazed, hardly dared raise their eyes, but soon they realized there was no illusion: the miracle continued, a sudden brightness and a sweet fragrance filled the church, while an invisible hand continued to hold the mystical Bread in the air before the young girl.

She herself seemed an Angel in adoration.

Her confessor was told to come, and saw all that the Sisters were seeing.

He placed the Sacred Host on a paten, and then gave it to the child. She seemed to lose consciousness.

But soon the Sisters grew anxious; they called her by name, told her to rise, touched her, but Saint Imelda was no longer of this world; she had expired in an ecstasy of pure love.