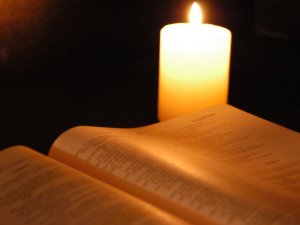 …Speaking strictly as a cleric, and I am sure NONE in my parish would dispute this, I deal with a very large amount of departures of souls….to some this is a burden for them and they leave my care…to others a source of comfort in what words I use in my “Humble Mumble” …but I wanted to take a moment to actually reflect with you all on what it means to a CLERIC.

I am not immune to the feelings of loss, having had more loss in my own life than any THOUSAND people would have over TEN lifetimes, and to some it may seem I “mouth” prayers….or “repeat words of religion” to comfort those grieving…not so.

Each and every loss I pray over is as if I myself have lost that person. I weep, I cry hysterically, I wail and sob…oh yes…just because there is a collar around my neck does not mean it chokes off the emotions.

Ever wonder why most funerals are almost always the same in some faiths? It is because we realize the TRUTH as a cleric…that there are NO words, in truth, that CAN comfort the grieving. My simple words may bring SOME comfort, but the person/persons grieving is beyond any simple prayer or mumble that ANY cleric can give.

The ‘light’ that was a person CANNOT be summed up in a short half hour service, that is FACT…we are merely trying to establish in the hearts and minds of those in pain that although the BODY has ceased, the SOUL is STILL ALIVE.

“But it is the spirit in man, the breath of the Almighty, that makes him understand.” -Job 32:8

What is the ‘soul’ you ask? Well, some will say it is the Divine Breath breathed into man when God created them…to others, a spiritual being or entity that is only bound by corporal means and is released to travel to another plane of existence…both, however are TRUE…

The best explanation I can come up with is found in Proverbs 20:27 when it says “The human spirit is the lamp of the LORD that sheds light on one’s inmost being.”

What we weep over at a graveside is in fact what is NOT there…the ‘light’ that was in our lives…the laughter, the joy, the love…THOSE are only with us in MEMORY…whereas the SPIRIT has departed for (yes, as some faiths regard it) another plane of existence.

Oh sure, there are many who will argue and bicker over whether there is a soul, or a heaven, or a God…but I (personally) believe this: “For who among men knows the thoughts of a man except the spirit of the man which is in him? Even so the thoughts of God no one knows except the Spirit of God.” – 1 Corinthians 2:11

HOW do we KNOW? In WHAT do we place hope? Does an animal’s soul mean LESS in God’s eyes? Does IT go to heaven?…good questions all, and I can only give THIS in response…

“I also said to myself, “As for humans, God tests them so that they may see that they are like the animals. Surely the fate of human beings is like that of the animals; the same fate awaits them both: As one dies, so dies the other. All have the same breath ; humans have no advantage over animals. Everything is meaningless. All go to the same place; all come from dust, and to dust all return. Who knows if the human spirit rises upward and if the spirit of the animal goes down into the earth?”

So I saw that there is nothing better for a person than to enjoy their work, because that is their lot. For who can bring them to see what will happen after them?” -Ecclesiastes 3:18-22

NO ONE KNOWS FOR CERTAIN what happens AFTER a person departs…it is by faith and faith alone that we even CAN understand. Is it merely some ploy by “religion” to somehow bring people BACK to their lives so they too do not become overwhelmed by grief? Maybe..but that is for each person and their inner faith to decide.

This is where it gets tricky…faith….to HOLD ONTO IT during the crisis of our lives. To stick closely to “The Promise” given to us by Jesus…and it is in THIS that Christians take to heart when faced with grief…

“Do not let your hearts be troubled. You believe in God ; believe also in me. My Father’s house has many rooms; if that were not so, would I have told you that I am going there to prepare a place for you? And if I go and prepare a place for you, I will come back and take you to be with me that you also may be where I am. You know the way to the place where I am going.” -John 14:1-4

In this simple passage Jesus tells us to release our sorrow, and our grief, and have FAITH in Him and His Father. It is THIS that the ‘promise’ is given…that ALL who have even a ‘mustard seed’ size grain of faith in Him WILL go unto Heaven.

This ‘Mustard Seed’ sounds pretty small eh? I mean after all, it is a TINY grain compared to say…a walnut….BUT with THIS TINY SEED OF FAITH IN YOU, and in HIS PROMISE, ANYTHING can be accomplished if you simply do but believe…

It is THIS…FAITH…by which ALL things can be accomplished..

“You don’t have enough faith,” Jesus told them. “I tell you the truth, if you had faith even as small as a mustard seed, you could say to this mountain, ‘Move from here to there,’ and it would move. Nothing would be impossible.” – Matthew 17:20

Holding fast to faith in times of woe is an almost insurmountable task to ask of some..especially to those who doubt, or have no faith in anything or anyone…but to someone of STRONG faith this promise is as hard as steel..as sure as the sun rising in the East…

If ANYONE could doubt His words it would be ME for I have seen EVERY aspect of the human animal…yes, for we ALL are animals whether we choose to admit it or not…the good, the bad, the downright EVIL that is in human nature to commit…and if I (the LEAST of these) can remain strong in my faith regarding His promise how can ANYONE ELSE DENY IT?

It is His PROMISE to us that holds me fast. Do I KNOW a soul goes to Heaven? No, I have no CONCRETE PROOF…but I have FAITH. Have I EVER BEEN there? No…but again, I have FAITH.

In this day and age of “I will believe it when I see it” types, I offer this: “Jesus asked, “Will you never believe in me unless you see miraculous signs and wonders?” -John 4:48

Faith, people…that is the ONLY thing that will see a person through the “dark night of the soul”.

And so to those who grieve, or sink into the depression that only loss of a loved one can bring, I say this: HOLD FAST TO YOUR FAITH…SIMPLY BELIEVE and it will BE SO.

“For since we believe that Jesus died and was raised to life again, we also believe that when Jesus returns, God will bring back with him the believers who have died.” – 1 Thessalonians 4:14 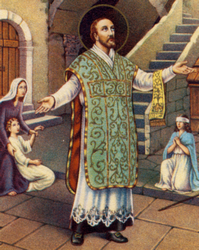 Valentine was a holy priest in Rome, who assisted the martyrs during the persecution under Claudius II.

His great virtue and influence became known, and he was apprehended and brought before the emperor’s tribunal.

Why, Valentine, do you want to be the friend of our enemies and reject our friendship?

The Christian priest replied, My Lord, if you knew the gift of God, you would be happy, and your empire with you; you would reject the cult of your idols and would adore the true God and His Son Jesus Christ.

One of the judges interrupted, asking the martyr what he thought of Jupiter and Mercury.

That they were miserable, and spent all their lives in debauchery and crime!

The emperor nonetheless continued his questioning with curiosity, pleased to have this opportunity to know what Christians thought. Valentine had the courage to exhort him to do penance for the blood of Christians which he had shed.

Believe in Jesus Christ, be baptized and you will be saved, and already in this life you will insure your empire’s glory and the triumph of your arms.

Claudius began to be convinced, and said to those in attendance, Hear the beautiful doctrine this man is teaching us!

But the prefect of Rome, dissatisfied, cried out, See how this Christian is seducing our prince!

Claudius, weakening, abandoned the holy priest to another judge.

This man, named Asterius, had a little girl who had been blind for two years.

Hearing of Jesus Christ, the Light of the world, he asked Valentine if he could convey that light to his child.

The child saw, and the Judge with all his family confessed Christ and received Baptism.

The emperor, hearing of this, would have turned his gaze away from these conversions, but fear caused him to betray his sense of justice.

With several other Christians Saint Valentine was tortured and martyred in the year 268.

This illustrious martyr has always been held in great honor in Rome, where there still exists a catacomb named for him.