Often called “Badonicus” because he was said to be born in the same year the Saxons were defeated by the Britons in the battle of Mons Badonicus [Mount Badon], Gildas was born in the lower valley of the Clyde in central Scotland into the ruling family of a small kingdom centred around Dumbarton.

As we know few facts about this battle, the date of Gildas’ birth can only tentatively be placed to the decades either side of the beginning of the Sixth Century.

Bede indirectly suggests the year 493 for this event.

It is recorded that Gildas’ father was called Caw Cawlwyd and his sainted brothers Caffo and Maeliog.

Of his mother there is no information. A strongly held tradition in North Wales gives the brothers’ names as Huail and Celyn (ap Caw).

The brothers were said to have refused to acknowledge King Arthur and Huail was executed in Ruthin where his execution stone is still preserved in the town square.

Celyn escaped this punishment by standing guard over the Copper Mountain in Anglesey from his base at Garth Celyn in Gwynedd.

As a young man he was sent from his Clydeside home to the great monastery of Llanilltud Fawr at Llantwit Major, in South Wales, where he, with such luminaries as Saint Sampson and Saint Paul Aurelian, studied under Saint Illtyd, though he was much younger than they.

After Gildas completed his studies under Saint Illtyd in 525 he travelled to Ireland in the company of Dewi Sant (Saint David) and Saint Cadoc, moving from one monastic centre to another, in order to continue his studies.

While in Ireland he was ordained priest and thereafter returned across the Irish Sea to teach and preach around his native Clydeside.

In due time, Gildas made for Wales to stay with Saint Cadoc at Llancarfan.

From there, he went on pilgrimage to Rome meeting the pope on his arrival there. On his return, Gildas elected to settle on the tiny island of Flat Holm in the Bristol Channel where, around 540, he wrote his treatise “De Exidio et Conquestu Britanniae” [On the Ruin and Conquest of Britain] a thundering denunciation of the British clergy and secular kings. In it he blamed the laxity of the clergy and the secular rulers for the collapse of Romano-British civilisation and in so doing laid the foundation of the great monastic upsurge that was to take place a half-century or so later.

At the same time it is believed that he copied a missal for his friend Cadoc.

Hints in fragments of letters suggest that Gildas also wrote a Rule for monastics that was a little less harsh than that of David’s Rule.

Some four years later, Gildas decided to settle in Armorica (modern day Brittany) and established a hermitage on the island of Horat near the town of Vannes.

In 546 Cadoc followed him across the channel and settled as a hermit near Etel.

Although Gildas settled on an island he did not cut himself of from the world and soon established a monastery and school on the mainland nearby.

Gildas made a further visit to Rome and called on Cadoc on the way. This time he carried a sweet-toned bell as a gift for the pope.

Cadoc asked his friend for the bell but Gildas insisted that it was a gift for Saint Peter’s and carried it on to Rome.

On presenting the gift to the pope the bell would make no sound and so it was brought back to Etel where, upon giving the bell into the hands of Cadoc, it resumed its beautiful chime.

In 560 he returned to Ireland at the invitation of King Ainmeric to reorder the monasteries, restoring discipline and liturgy.

While there he taught in the great School of Armagh and visited the great monasteries of Bangor and Clonard.

For his final years Gildas once again settled in Brittany, founding a monastery at a place which bears his name: Saint Gildas-de-Rhuys in Morbihan, which, according to Peter Abelard who was later abbot there, was not a very salubrious spot.

A holy well bearing his name lies nearby.

The Wise Gildas reposed on 29th January 570 and, according to his wishes, his body was placed in a boat and allowed to drift.

Three months later his incorrupt body was discovered in a nearby creek and he was brought back to the church in Rhuys.

His tomb stands behind the altar of the present church which also contains some other relics.

Below is a picture of his relics and the Cathedral to which it is interred…. 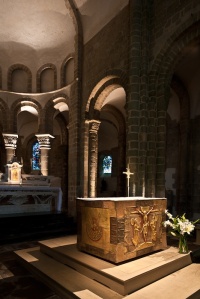 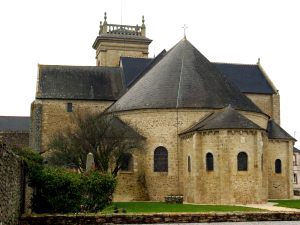