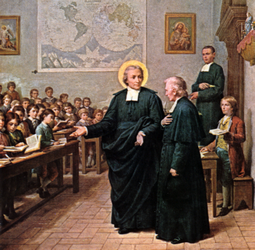 Complete dedication to what he saw as God’s will for him, dominates the life of John Baptist de LaSalle.

Founder of the Brothers of the Christian Schools, or Christian Brothers, he was canonized in 1900. In 1950 Pope Pius XII named him patron of schoolteachers.

Saint John Baptist was born of the nobility of Rheims in 1651, and after a very pious youth was ordained a priest at the age of 27, becoming at once a Canon of the Cathedral there.

It was said that to see him at the altar was sufficient to give an unbeliever faith in the Real Presence of Our Lord. The people would wait for him to come from the church to consult him. His life was marked by a rule he set for himself, to maintain perfect regularity in all his duties.

He became interested in the creation of gratuitous schools for poor and abandoned children. He himself was invited to help in their education; and after directing the teachers for four years, decided to join them. In this he was opposed by most of the city, for whom such a life was very humiliating for a Canon of the Cathedral.

His spiritual director, a virtuous Franciscan Minim priest, encouraged him, saying that for teachers, whose vocation is to aid the poor to walk in the footsteps of Jesus, the only suitable inheritance is the poverty of the Saviour.

Saint John Baptist divested himself of the patrimonial wealth he still controlled, then took religious vows with his co-workers. His tender and paternal charity soon sanctified the house and the labors; peace reigned, and the members of the new society loved one another sincerely.

The Institute developed and spread amid a thousand difficulties and persecutions; these, by humiliating its members, brought down graces on them and made the Providence of the Lord more evident.

The blessed Founder died in 1719; a religious superior said of him that his humility was universal; he never acted without taking counsel, and the opinion of others always seemed better to him than his own.

He listened to others in conversation, and was never heard to say any word tending to his own advantage… Indeed it is God who elevates those who take the last place for themselves, to place them among the first.