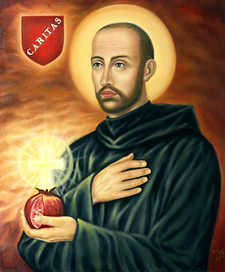 Nothing in the early life of John Ciudad, born of a poor couple in a town of Portugal, foreshadowed his future sanctity. Following a traveler whose description of Madrid had captivated his imagination, this only son of his parents ran away from his home.

Soon regret and misery overtook him, but he was ashamed to return to his abandoned parents. In effect his mother, struck with a fever, but advised by an Angel that John would have to undergo long trials which would strengthen his virtue, departed this life only a few days after his adventure began.

For several years the renegade was engaged in tending sheep and cattle in Spain; his employer eventually offered him his only daughter in marriage and thereby a rich heritage, but John was interiorly advised that such was not his vocation.

He left in secret the next day, joined the army of Spain against the French, later against the Turks. When he was about forty years of age, feeling profound remorse for his life which lacked order and purpose, he returned to his home village, only to learn of the death of both his parents.

I am not worthy to see the light of day! exclaimed the grief-stricken voyager. He visited the cemetery, suffocated by his sobs, and cried out, Pardon, pardon! O mother! Eternal penance!

He resolved to devote himself to the ransom of Christian slaves in Africa, and on his way served the sick in a hospital. Meeting an aged nobleman at Gibralter, unjustly exiled and on his way to Africa, John offered to go there as his servant, to remain with him and his family and support them by his labor.

Count DaSilva fell ill in the new climate and soon died, thanking John for his unfailing aid, and predicting he would some day be one of Spain’s greatest apostles. His family received amnesty and returned to Spain.

John, too, returned there by the advice of his confessor, and sought to do good by selling holy pictures and books at low prices. Finally the hour of grace struck.

At Granada a sermon by the celebrated John of Avila shook his soul to its depths, and his expressions of self-abhorrence were so extraordinary that he was taken to the asylum as one insane. For a time he acted this role purposely, in order to be whipped daily as a remedial measure.

His confessor was John of Avila, who when he learned of this told him to cease his pretense and do something useful. Thereafter he employed himself in ministering to the sick.

He began to collect homeless poor, and to support them by his work and by begging. One night Saint John found in the streets a poor man who seemed near death, and, as was his wont, he carried him to the hospital, laid him on a bed, and went to fetch water to wash his feet.

When he had washed them, he knelt to kiss them, but was awestruck: the feet were pierced, and the print of the nails shone with an unearthly radiance.

He raised his eyes, and heard the words, John, it is to Me that you do all that you do for the poor in My name. It is I who reach forth My hand for the alms you give; you clothe Me; Mine are the feet that you wash. And then the gracious vision disappeared, leaving Saint John filled at once with confusion and consolation.

The bishop became the Saint’s patron and gave him the name of John of God.

When his hospital was on fire, John was seen rushing about uninjured amid the flames until he had rescued all his poor.

After ten years spent in the service of the suffering, the Saint’s life was fitly closed when he plunged into a river to save a drowning boy, and died in 1550 of an illness brought on by the attempt.

He was fifty-five years old.