Jesus heard this and said to them (that), “Those who are well do not need a physician, but the sick do. I did not come to call the righteous but sinners.” -Mark 2:15-17

So…who are “Tax collectors and sinners”??

Is it the person who goes to Church and sings the loudest, or donates the most,or shouts praises in Church loudly,brags about how they have “been saved” to all and sundry, or gives to charity and makes it known to all that they DO???

NOPE, NOT EVEN CLOSE!!

Or is it the person who quietly gives what they have without flashing it before others,the one who volunteers at the local hospice, or animal shelter, the one who takes blankets down to the poor, the person who sees someone in despair or hunger and puts an arm around them or gives up their own meal even if they are a stranger….? INDEED IT IS!!

Think about it for a second…the “average Joe” is not a pew pounding, bible thumping, scripture flouting, “holier than thou” type….

Back THEN it was a Tax Collector…a Soldier….a Potter…someone who was content to just do their job, earn their pay, go home to their family, and live a normal life….not the person who went to Temple every other day and spouted “Salve'” and “Ave” like it was a catch phrase.

Times have not changed much….the “faceless masses” who go about their daily lives, pay their taxes, and obey the law ARE the tax collectors and sinner of our day.

I see people out there shouting “HALLELUJAH!” at the top of their lungs, and bragging about how much time they spend either in church, or donating to causes….when in fact all they are doing is EXACTLY what is described in Mark 12:41-44

“Jesus sat down opposite the place where the offerings were put and watched the crowd putting their money into the temple treasury. Many rich people threw in large amounts. But a poor widow came and put in two very small copper coins, worth only a fraction of a penny.

Calling his disciples to him, Jesus said, “I tell you the truth, this poor widow has put more into the treasury than all the others. They all gave out of their wealth; but she, out of her poverty, put in everything—all she had to live on.”

They are the proud…the ones who LOVE to have people SEE their donations, to SEE them there in the Church, to BRAG about how good a Christian they are…when in fact, the person who simply and quietly takes their spare cans of food down to the local food bank, or who sees the beggar on the street and without reservation,or thought to the amount and not for show or praise,dips their hand into their pocket and gives them whatever is there without looking at what it is in their hand.

You do not have to flout to the whole world what your faith is.

You do not have to be center ring in order to see that God is not interested in how much you donate to the Church, or in trying to prove how much better a Christian you are than others….no, it is something even far easier and less gaudy than all of these… it is in DOING the right thing and keeping YOUR life inline with His teachings and word that make a Christian a Christian.

“Suppose a man comes into your meeting wearing a gold ring and fine clothes, and a poor man in shabby clothes also comes in.

If you show special attention to the man wearing fine clothes and say, “Here’s a good seat for you,” but say to the poor man, “You stand there” or “Sit on the floor by my feet,” have you not discriminated among yourselves and become judges with evil thoughts?” -James 2:2-4

If I have learned ANYTHING in this world, it is not the ones who sing the loudest, nor those who call out “HALLELUJAH” at every pause, nor those who make a great show of being a Christian who are REALLY doing what Jesus asked of them…it is the simple humble person who treats their fellow man with love, shelters those in need, gives without having to be ASKED to give and does not count the cost in pennies that marks the REAL person doing God’s will from the Pharisees….

So before you judge how good a Christian SOMEONE ELSE is, look at yourself HARD in the mirror of your soul…you may be surprised to find that it is YOU who needs to rethink your Christianity, and the way YOU are…not the way THEY are….

“Jesus went out along the sea. All the crowd came to him and he taught them.

As he passed by, he saw Levi, son of Alphaeus, sitting at the customs post.

And he got up and followed him.

While he was at table in his house, many tax collectors and sinners sat with Jesus and his disciples; for there were many who followed him.

Jesus heard this and said to them (that), “Those who are well do not need a physician, but the sick do. I did not come to call the righteous but sinners.” -Mark 2:13-17. 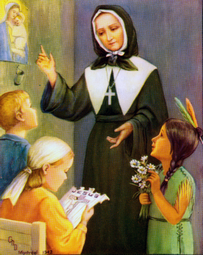 Saint Margaret Bourgeoys was born in Troyes, France, on Good Friday, April 17, 1620. She was prepared by Divine Providence, over a period of many years, for her future mission. When she was twenty years old, Margaret saw the Blessed Virgin who looked at her during a procession, and smiled at her. F

rom that time on, she abandoned all ornaments and amusements common to her age and entered into a sodality of the Children of Mary, of which she became the President.

Ten years later, on the Feast of the Assumption the Child Jesus, in appearance about three years old, made Himself seen by her in the Sacred Host of the monstrance. He kindled in her heart bright flames of divine charity, and inspired in her a great contempt for all earthly goods, with an unquenchable thirst for souls.

In 1653, when she was thirty-three years old, Margaret Bourgeoys set sail for Canada. The Virgin said to her: Go, I will not abandon you. Four years passed before she could undertake the Christian education of children. In the meantime, her charity was lavished on all; she visited and served the sick, buried the dead, consoled the afflicted, taught catechism to the colonists.

From then on, her task would be to form and direct a non-cloistered religious community dedicated to teaching. In 1658 she laid the foundations of her Congregation of Notre Dame Sisters by opening the first school of Ville-Marie (Montreal), in a stable offered by Monsieur de Maisonneuve.

She soon found co-workers, whom she initiated for their work. The little schools of New France began to spring up on every hill and in every valley.

The social work of Mother Bourgeoys is no less admirable than her educational labors. Her dedication extended to the service of the many young households of those days. She took in, guided and directed the Daughters of the King, sent to be married to the colonists, inculcating in them a sense of the serious duties of a spouse and mother.

She remained their counselor for long years, to whom they always turned for comfort and encouragement in the practice of virtue. The ingeniousness of Margaret became evident from her many varied projects: a workshop for young girls and married women, a vocational school for the formation of her companions in education, the Work of the Tabernacles which she founded with the recluse Jeanne Leber; a pious association for young girls.

After 47 years of labors blessed by heaven and the Blessed Virgin, Margaret Bourgeoys died, at the age of eighty, with the reputation of a soul eminent in sanctity. In a solemn ceremony at Saint Peter’s in Rome on November 12, 1950, Pius XII declared her Blessed.

Since then she has received the honors of canonization.